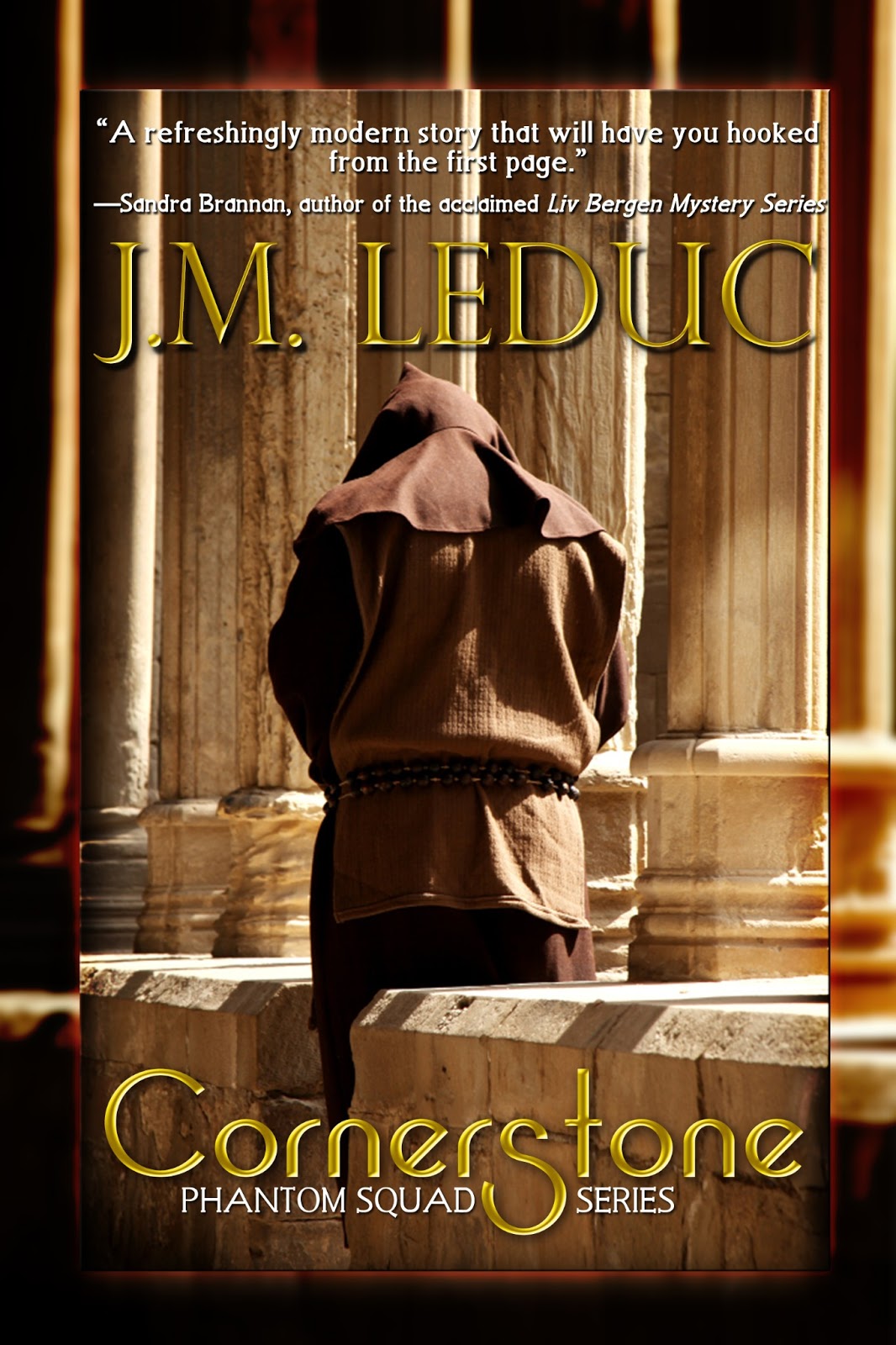 In the blink of an eye, a life begins and another ends.

In a blink of an eye, Brent Venturi falls into the chasm of despair.

What do you do when everything is lost? When the person you loved is gone and all you have left is guilt? These are the questions that face Brent, the leader of the Phantom Squad and the latest in Noah’s line of descendants. His answer—go back to the beginning, back to where it all began—Mount Ararat.

In his travels, Brent will meet Rowtag Achak, a Cree brave and Special Forces sniper who is on a similar path of self-destruction. Together, they will trace their steps from Palm Cove to Washington D.C., all the way to Armenia and the Khor Virap Monastery which sits at the base of Mount Ararat. Their travels will eventually take them to Alpha Camp and the Hindu Kush Mountains on the Pakistan-Afghanistan border.

When President Dupree and the Phantom Squad get captured by the Brotherhood of Gaza, time for introspection is over and time for action begins. Brent must find a way to get back to the man he was in order to save the people still left in his life.

What begins as a sabbatical of self-awareness turns into a mission of survival. His own, that of the squad and more importantly, that of the president of the United States. What man and nature takes away, only God can restore. The restoration of the Cornerstone.

To find the beginning, one must walk through the past and be willing to step into the future.

In one combustible moment, Brent’s life became a tumultuous cascade of happiness and horror. He had witnessed the birth of his daughter and the death of his wife.

Eight years ago, after his first encounter with the Omega Butcher, a sadistic serial killer, Brent Venturi lost his identity. Emotional and physical scars forced a sabbatical from the team he led: The Phantom Squad. It was only through the peace he had found in God and in his hometown of Palm Cove that he was able to recover from his physical and psychological injuries.

He was once again sliding back down that slippery slope of despair into a deep, depressive abyss. The place he once ran to for tranquility no longer provided comfort. He spent his days alone and his nights wandering the streets.

The nightmares that once plagued his life, the nightmares he thought were in his past, once again tore a path through his subconscious mind. It was terrifying enough when his dreams brought visions of his own torture, but now, the visions and images were different. More vivid, more personal, more terrifying. The tortured was now Chloe. His nightmares were made worse by the images of blood: so much blood, pools of blood, on her, on him . . . everywhere.

When he did manage to fall asleep, Brent woke up in a pool of sweat and vomit, fearful that the wetness he felt was blood. Chloe’s blood.

Agony was making him less of a man and more of a weapon of mass destruction.

Seven walked with a purposeful stride down the halls of SIA headquarters which made all other three letter intelligence agencies seem like child’s play. The sound of his footfalls as his heavy boots struck the tile floors reverberated in his ears like the base of a stereo. He heard it echo off the solid steel walls. As he walked deeper into the labyrinth, he looked up at the writing over the door that led to the inner sanctum.
We are called upon when others fail.

He placed his hand on the black glass panel next to the steel door. Like all others in HQ, it worked by palmer recognition. A faint red line slid under his hand. The door’s air lock disengaged. He repeated this maneuver multiple times as he descended further into the maze, finally arriving at his destination, the security office. Joan’s lair.
Joan, an eclectic blend of bohemian and punk was Maddie Smith’s personal assistant and a self taught computer genius. Her office was nestled in the midst of SIA’s security hub. A sea of computers and flat screen monitors filled every bit of desk and wall space. As he entered, she sat transfixed and stared at a video feed. The monitor she was glued to took up one entire wall and was embedded in three feet of concrete and steel.

“How long has he been there?” Seven asked.

Joan turned just long enough to acknowledge his arrival. “I arrived at o-eight hundred hours. The security clock shows he’s been there since…”

It had been the same pattern for the past ten days.

He stood behind her and watched Brent in the armory. Seven, like all of those close to Brent, was showing the signs of stress. In the past weeks, wrinkles from age crept into his face, like dried fissures on barren land.

He blinked the sleeplessness from his eyes. “Can you roll the tape back to when he arrived?”

“I can, but nothing has changed. Brent is still anal—a man of pattern.”
Seven reached into the back pocket of his jeans and took out his tobacco tin. Watching the screen, he tapped the lid, shook loose the tobacco, and placed it between his lower lip and gums.

Joan looked at him, rolled her eyes and shook her head. “Much like yourself.”
Seven smirked and spit in his empty coffee cup. “Oblige an old man,” he drawled, “and run the tape.”

“Yes, sir.” Joan reached over with her left hand, nimbly fingered the keyboard, and brought up the tape.

“Finally, a woman who will listen to me.”

“I hope that wasn’t meant for me.”

They both turned and saw Maddie standing in the doorway. Maddie Smith was the director of the SIA and Seven’s wife. As always, everyone’s eyes were glued to her—she was stunning. A voluptuous redhead who knew how to draw attention from both sexes. She embodied a 1950’s movie starlet.

Her piecing emerald green eyes focused on Joan. “Why so formal this morning?”

Joan shrugged. “Everything seems so formal since, . . .” her eyes moistened, “you know.”

Maddie’s voice took on a saddened tone. She stood behind Joan, lightly rubbed her shoulders, and kissed the top of her head. “Yeah, I know, but I would feel better if you went back to calling me Maddie, or Mom, or the ‘B’ word that you mumble under your breath from time to time.”

Joan wiped her tears and sniffed. “And what word would that be?”

A partial smile surfaced on Joan’s lips. “Oh, that ‘B’ word. Right.”

“That’s the first time I’ve seen you smile in weeks. It feels good.” She looked at Seven expecting a sarcastic comeback, but he was glued to the screen. The look in her husband’s eyes made her shiver. “What is it?”

“It’s Brent’s eyes. They’re blank. Emotionless. It’s as if he were on a squad mission.”

“Is that so bad?” Joan said. “Isn’t that the way you all look when you’re engaged in training?”

Pointing to the monitor, Seven said, “This is different. Look at his jugular veins. His eyes may be expressionless, but the rest of him is about to snap.”

Maddie drew in a deep breath as she watched the monitor. Blowing it out, she knew what she had to do. “We can’t put the inevitable off any longer. Call the directorate and the Phantom Squad to a meeting at thirteen hundred hours and Seven,” she waited for him to acknowledge her. “Get him there.”

Mark Adduci, writing as J. M. LeDuc is native Bostonian, who transplanted to South Florida in 1985. He shares his love and life with his wife, Sherri and his daughter, Chelsea.
Blessed to have had a mother who loved the written word, her passion was passed on to him. It is in her maiden name he writes. When he is not crafting the plot of his next thriller, his alter ego is busy working as a professor at The Academy of Nursing and Health Occupations, a nursing college in West Palm Beach, Florida.
J.M. LeDuc’s first novel, “Cursed Blessing” won a Royal Palm Literary Award in 2008 as an unpublished manuscript in the thriller category. It was published in 2010. He has subsequently written Cursed Presence and Cursed Days, books two and three of the Trilogy of The Chosen, as well as a novella, Phantom Squad. He is a proud member of the Florida Writers Association (FWA) and the prestigious International Thriller Writers (ITW).

No Responses to “Cornerstone by J.M. LeDuc”