It doesn’t take a crystal ball to see that something’s not right on Bay Island...

Since she left her psychiatric practice in New York City to open up a psychic shop in her hometown on Bay Island, Cass Donovan has given her fair share of readings to conflicted customers. But what she sees in Ellie Callahan’s future doesn’t bode well.

When Ellie’s mother, Marge, publicly confronts Cass about the reading, the embarrassment makes her want to curl up and die. And when she later stumbles across Marge’s body—and is a suspect in her murder—Cass is suddenly the star of Bay Island’s rumor mill.

Cass is determined to prove her innocence and save Ellie from meeting the fate in her unfortunate vision. But even with the help of her friends Bee and Stephanie, Cass will have to channel some serious sleuthing instincts to find the real killer...

How Mystical Musings Came To Be
by Cass Donovan

Hi. I’m Cass Donovan, owner of Mystical Musings, a small psychic shop on Bay Island. My shop sits in the perfect location. The front door faces the boardwalk, and the back door faces the beach. I love sitting on the back porch and looking out over the bay, watching the boats headed to Long Island, the kids playing on the beach, and tourists flocking to the lighthouse that overlooks it all. It brings back such fond memories from my childhood.

Though I grew up on Bay Island, I left seventeen years ago to go to college and only returned last year after my psychiatric practice and my marriage both failed. But that’s another story.
I opened Mystical Musings last year, but the idea of the shop on the boardwalk actually originated when I was trying to save money for college. When I was in high school, my friends and I used to spend hours sitting on the beach, and what better way to pass the time than people watching. I loved studying the tourists, then make up stories for them, giving them fictional lives based on what I perceived.

I found it easy to determine moods, since most people wear their moods clearly in their expressions, but then I started noticing other things, more subtle tells. The way some would twist their hands together when they were nervous or fold their arms across their chests when they were hiding something.
It got to be a game. Sometimes my friends would join in, offering their own insight into the tourist’s lives, swearing they were right when my gut would tell me they couldn’t be further from the truth.
Then, one particularly boring day, a group of us were hanging around making up stories. One of the boys issued a challenge I couldn’t ignore. He dared me to approach a woman and share my story with her. I still laugh remembering the looks on their faces when I shrugged, stood up, brushed myself off and marched down the beach toward her. With only one backward glance, I walked up to her and said, “Excuse me.”

She had kind eyes, but there was a sadness in them that I wanted to understand. When I offered to do a psychic reading for her, she agreed with a good-natured but skeptical smile. As it turned out, I was extremely close on all counts. The sadness in her eyes was from a recent break up, the way she wrapped her arms tightly around herself was a defense mechanism. She didn’t trust people, wanted to keep them out, thanks to her ex-boyfriend’s cheating. I had nailed so much of her story, and was ready to walk away with a smug smile for my friends. But then I realized the sadness still filled her eyes, and I found I wanted to help, wanted to do something to alleviate her suffering.

So I offered her a premonition, a brief glimpse of the future I imagined for her with a man who would treat her like gold. Though she still appeared somewhat skeptical, there was a bit of optimism and hope as well. And I realized how good it felt to use my gift to help someone. I still think about that woman on occasion and wonder if any of my predictions came true. I certainly hope so.

Anyway, much to Chief Langdon’s dismay, I spent the next few summers approaching tourists and offer to do “readings” for them, only charging if I was able to give them an accurate depiction of their lives. In the beginning, I got about half right. By the time I left for college, I was rarely wrong. When I returned to Bay Island, I picked up where I left off, but this time, I opened my own shop, and now the tourists seek me out.

Death at First Sight by Lena Gregory is the first book in the Bay Island Psychic Mystery series. Cass Donovan is the owner of Mystical Musings, a psychic reading shop. Cass becomes a suspect in the murder of Marge Hawkins. She figures the only way to clear her name of Marge’s murder (and the murder of a blonde stranger) is to find out who killed them.

With the help of her best friends, Stephanie and Bee, Cass tries to work out who the killer is. She gets closer to finding out who committed the crimes, but endangers herself along the way. Cass doesn’t know if she should suspect someone she knows, or even a handsome new stranger in town, Luke.

This was a fun mystery in a great location. Lena Gregory is an author to keep your eye on! Cass has great intuition and that’s what helps her in her amateur sleuthing. Bee might have been my favorite character. He was creative, loyal, and had me laughing out loud. Overall, I enjoyed the mystery. There were a few instances where I felt like the information wasn’t given…and then a few pages later, a character would reference information that hadn’t been stated. However, I still felt this was a good first book. I really liked the characters, and the setting. The mystery did keep me guessing with a few viable suspects throughout. I am looking forward to the next book in the series.

Bottom line: I was swept up in the cozy world of Bay Island, and the mystery and characters will keep me coming back for more. 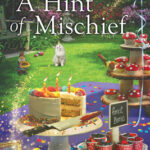 One More Kill by Carolyn Arnold
Deadly Traditions – A Cozy Mystery Christmas Anthology – Spotlight & Giveaway
Summer Camp Culprit by C.K. Fyfe
What Not to Wear to a Graveyard by Debra Sennefelder – Book Blast
Buttercream Betrayal by Kim Davis – Spotlight & Giveaway
The Mystery of the Tea Cup Quilt by Jodi Allen Brice – Every Quilt (and Book!) Has a Story – Guest Post + Giveaway