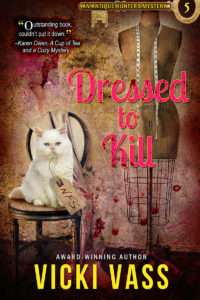 Dressed to Kill by Vicki Vass
An Antique Hunters Mystery #5

In 1865, Elizabeth Keckley, Mary Todd Lincoln’s dressmaker, conspired to change the course of the Civil War. Crossing lines between North and South, the band of conspirators wove a plan that remained undiscovered for more than 150 years until Antique Hunter Anne Hillstrom finds one of Keckley’s gowns. She and fellow Antique Hunter CC Muller unravel the mystery that has left a trail of dead bodies, leading to the doorstep of their antique store, Great-Aunt Sybil’s Attic.

Dressed to Kill is the fifth book in the Antique Hunters Mystery Series. Rooted in history, the series reimagines real-life events blurring the line between fact and fiction.

I spent a week in Boston recently for work and was able to reconnect with an old friend who had moved there from Chicago. I hadn’t seen her in about 18 months. After working 10 hours on Sunday, she picked me up and drove me to her home where she prepared a lovely meal of chicken pan sautéed with tomatoes, feta cheese and kalamata olives. It was tender and juicy.

Even more important than the meal was the conversation. We caught up and connected as if there had been no distance between us. It was lovely to see that our friendship hadn’t changed, and we could have these lengthy discussions. She originally provided the inspiration for one of the characters in my antique hunters series. In the books, my heroine Anne has an arch nemesis who competes for prizes at various auctions, estate sales and flea markets. My friend turned into that character quite by accidence as I was developing the series. She is now known as “Buttersworth.”

We met again last night. After five long days, my conference had ended. I had been in Boston for five days and not had a single bite of seafood. We traveled to the Old Oyster House, one of the oldest restaurants in Boston. It was steeped in history which were detailed on its walls such as the first toothpick was used there. On our walk through, we passed the Common where the Sons of Liberty first began their protest and the Boston Massacre occurred. The uneven cobblestone streets reminded me how close to history we were.

The restaurant was ensconced in an old house. We took the steps up to the second floor where there were several small booths. The ambience was enjoyable and served the atmosphere well.

When it came to ordering I threw caution to the wind. Like Anne, I am continuously on a low-carb diet, trying to lose weight. On this trip, I threw that out the window and indulged slightly. We enjoyed fried calamari, and I had the best New England clam chowder I had ever had. It is even better than mine. We finished the meal with crab cakes. I was quite stuffed after dinner.

We enjoyed a leisurely stroll back to my hotel with gentle conversation and stopped at a few stores. I purchases several cotton tops at the Gap Outlet and found it difficult to close my suitcase. It was a delightful way to spend the evening and to reconnect with an old, valued friend.

In the books, Anne often finds herself connecting with old friends as well as making new ones. In the latest book, Dressed to Kill, Anne strikes a friendship with Rachel Contraldes. In real-life Rachel was a fan of the series and won a contest so we named the character after her. It has been a pleasure to get to know Rachel as I was writing the book.

I hope you enjoy Dressed to Kill and thanks for letting me stop by. 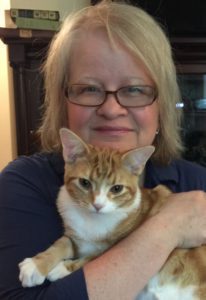 With a passion for shopping and antiques, Vicki Vass turned in her reporter’s notebook to chronicle the adventures of Anne and CC, two antique hunters who use their skills to solve a murder case.

Vicki has written more than 1,400 stories for the Chicago Tribune as well as other commercial publications including Home & Away, the Lutheran and Woman’s World. Her science fiction novel, The Lexicon, draws on her experience in Sudan while writing about the ongoing civil war for World Relief.

She lives in the Chicago area with her husband, writer and musician Brian Tedeschi, son Tony, Australian shepherd Bandit, kittens Terra and Pixel, seven koi and Gary the turtle.