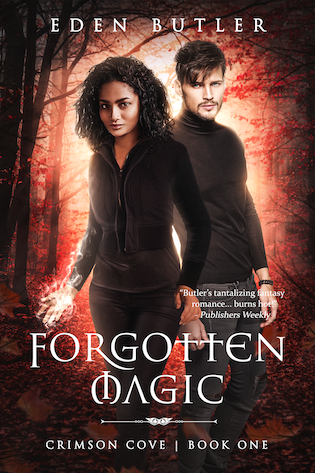 But each day, that brooding wizard gave Janiver Benoit a glance.

And when she could not take another quiet stare, or the warmth that look sent over her skin, she took from Bane something he’d never give freely—one lingering, soul knocking kiss.

Ten years later, someone has stolen the one thing that keeps magic hidden from the mortals in Crimson Cove and only Janiver can recover it. But returning to her hometown means she’ll have to face the past and all the secrets she left buried there, including the one person she promised herself she’d never see again. The dangerous wizard that might make leaving Crimson Cove the last thing she wants to do.

WHAT REVIEWERS ARE SAYING:

★★★★★”Butler’s tantalizing fantasy romance, originally self-published as Crimson Cove, burns slow and hot…The magical elements are electric and the chemistry between Bane and Janiver is delicious. Butler builds the tension slowly, carefully pulling story threads to a satisfying but open-ended climax. Readers will be eager to return to Crimson Cove.” – Publishers Weekly

★★★★★ “Eden is a masterful storyteller who takes mere words and turns them into magic.”

★★★★★ “I REALLY LOVED this fresh, innovative, and out of the box concept of a modern romance with a dark, ethereal twist.”

“Some of us didn’t need to train in Norway with thousand-year-old mages to learn our craft.” Made a little bolder by the liquor, I stepped into Bane’s personal space and ran the tip of my fingernail over the runes wrapped around his forearm. “All these runes, all that pain and blood, I never once had to suffer so much for my craft.”

“Maybe,” Bane said, taking the bottle from me, “if you had, you wouldn’t need the liquor.”

“Maybe I like the liquor.” My tongue was heavy in my mouth and I wasn’t sure why my voice had suddenly lowered or how I could feel the ley lines whispering against my mind.

But Bane wasn’t drinking, and he seemed able to control how the lines affected him. He was too versed in blocking raw magic. Still, he didn’t seem wholly unaffected, and for whatever reason, he at least didn’t object to how closely I stood in front of him. “You strike me as the type of witch who likes things that are bad for her.”

The laughter came quickly, the first I’d released in over a week. Just then, I didn’t think about the darkness that took me with Freya’s death. Something light, almost sweet came into my head and I glanced at that bottle, only just realizing that I hadn’t been drinking whiskey at all.

“You didn’t know?” He laughed, scrubbing his face. “Circe, Jani. I thought you were more careful.”

Shrugging, I let the elixir work through me, enjoying the way its potency made everything feel electrified and sweet. Dipping my head back, a sudden reminder of the worst possible thing for me—the wizard standing inches away—seemed so attractive, so sweet, and I licked my lips, my inhibitions lowered as I watched him.

Unbidden, a memory of that solitary day when I’d bitten the forbidden fruit and I forgot myself for just a moment filled my head. “And, baby, you’ve got no idea how much I like things that are bad for me.”

Bane blinked. I blinked and just for a second I savored the silent room, the energy that built between us then. “Did you…did you just call me baby?”

It was if he’d unstoppered a drain and I twirled down into its belly. Berry Burn wine or not, I immediately sobered. Mortification, humiliation, it had to be all over my face, easily read in my expression. But I was not a witch who would admit defeat or mistakes made so quickly. I was a natural survivor. I’d say anything to weasel my way out of a tight spot. Or utter humiliation.

“No.” There was a touch of humor in my response—forced and clearly fabricated—but it didn’t stop me from making that sound or stepping back when Bane held my wrist.

“You did.” He pinned me in the corner of the counter with that wide body nearly engulfing me in shadow and heat. “Damn.” Bane came so close, mouth too near my neck as though he was just managing to control himself and not devour me right then and there. “Why do I like that?”

I knew why and just then, I hated that he didn’t. Because you claimed me! Ten years ago, I wanted to scream. Because I am yours, because you belong to me.

Some part of him had to know the truth, despite the block I had put on his memories. Somewhere, behind all that power, the knowledge, the lists of lines of duty and expectations, lay the hidden memory of that one blissful afternoon with me in that empty classroom. The day our nexuses melded. The day we claimed each other.

The way Bane looked at me, the deep focus of his gaze on my mouth, shifting across my fingers brought us closer and closer to the edge of something that could mean nothing but misery. For him, at least. And I couldn’t stop it. I didn’t want to stop it.

All around us seemed to settle, every sound, every scent, just like it had that day, just like it had the first time we kissed. The only sound I could clearly hear was the steady, rhythmic pulse of his heart and mine—two separate bodies moving toward each other, closer, nearer until Bane’s stubble grazed on my cheek and he held my head still, insistent between his fingers.

I had only to tilt my head back a little. Move my chin, wet my bottom lip and he’d take my mouth. It was all there on his face. Expressions that told a thousand stories, made a million promises, and I wanted them all inside me with him, where he was meant to be.

Just one small movement and it would be done.

Bane tilted my chin, held my face between both hands now and I heard him come closer, waiting, making my mind up that I would only take a taste…

A taste that wasn’t mine.

A touch that belonged to someone else.

Eyes shut tight to clear away Caridee’s perfect skin, her perfect hair—the flawless Rivers coven regalia that Bane deserved. The one taught over and over to us as expectation. Certainties that had never been changed. The way the Cove existed so that there was no upset, no chance of shaming all of the Cove by letting the mortals know what we are and how we lived.

Things that had been constants for everyone in the Cove. Each coven depended on the other. Each den, every pack, all connected.

The way of things.

The things I’d left behind.

Before I realized I’d uttered a sound, the word came out, my hands pushing against that wide chest and “Parley!” echoing around the kitchen.

Bane steadied my hands when I tried to push at him again, holding me by the shoulders so I wouldn’t leave. Eyes wrinkling as he squinted at me, the expectation was evident. He wanted clarification. He wanted me to explain why I’d used the most antiquated, passé respite possible in our world.

Parley? Had I really said that?

But the black flag had been lifted and measures were maintained even in such…personal matters. Bane was heir to the most powerful coven in the Cove. Even he had to mind the rules we all lived by.

“I did.” Damn. An inhale to push back the tension crowding between my eyes and I glanced up at him, grateful that I hadn’t spelled him to back away. “Parley. Back off. Don’t…don’t touch me. Talk only.”

“Why in the hell would you…”

“I have reasons.” I waved my hand so he’d step back. “Please, I already told you…I have a job to do and a creature to find. I can’t have you being a distraction.”

“I’m the distraction?” He moved his gaze over my body.

“Didn’t you say we’re on a time crunch here?”

He nodded, reluctantly agreeing. “Fair enough.” He stepped back, pulling on the neck of that bottle fisted between my fingers. “We have to get this search going.” He set the bottle on the counter next to the sink. I nodded, started to walk away, but Bane tugged on my arm, his fingers touching right on my skin. Shuddering in my limbs, in his, and his eyes grew wide. He twisted his head to the side like he needed to shake the sensation away, then jerked his gaze up at my face. “What…what the hell was that?”

He stared at me a long time, then at his fingers still gripping my arm before he dropped it.

“The search?” I said when Bane had stayed too quiet. “I’ll see you out there in ten minutes.” Before I left into the hallway, Bane called my name. Stopping would be stupid. Not stopping, though, might tell him I couldn’t control myself alone with him. He’d already gotten enough of my fear in the past few days. I wouldn’t hand him anymore.

Eyes, chin twisted toward him, I didn’t dare stare right at his face. I can admit that I was a coward when it came to him. But Bane didn’t seem to care that I wouldn’t look directly at him. He clicked back into control mode. “We finish this…all of this, as quickly as possible.”

“That’s fine with me.” A little more relaxed now that he was back on task, I turned around. “I’ve got…a life waiting for me in New York.”

Two long strides put him back in front of me and I immediately cursed myself for stopping. Bane’s mouth was tight, eyes narrowed as though he needed to concentrate on anything other than the rip of energy that bubbled between us. The lines feed off anger, passion, lust. All of those things, with a few other emotions, permeated the room. It made the lines pulse square into us.

“The sooner the job is over, the sooner we can discuss what the hell that was and what you’ve been running from for ten damn years.”

He didn’t wait for me to answer. He didn’t want to see me huddle against the counter or try like hell not lean across the granite just to get my skin to cool. It didn’t matter that Bane was curious, that he wanted answers. I was there to do a job. I was there to save my family’s name. None of that would include a conversation with Bane Iles about what had happened to us when we were kids. I’d be long gone before then. Again.

Eden Butler is a writer of contemporary, fantasy and romantic suspense novels and the nine-times great-granddaughter of an honest-to-God English pirate. This could explain her affinity for rule breaking and rum.

When she’s not writing or wondering about her possibly Jack Sparrowesque ancestor, Eden patiently waits for her Hogwarts letter, reads, and spends too much time in her garden perfecting her green thumb while waiting for the next New Orleans Saints Superbowl win.

She is currently living under teenage rule alongside her husband in southeast Louisiana.