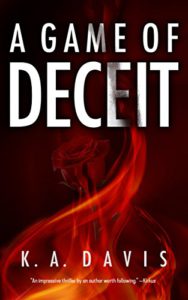 A father’s disappearance never solved, a mother’s secret taken to the grave, a daughter deceived…

Kathryn Landry thinks her life is just about perfect. She is the owner of a successful interior design business in Newport Beach, California, and she has an attentive, supportive husband. But her world comes crashing down when her husband, Neil Landry, vanishes without a trace…in a situation almost identical to the disappearance of her father twenty years before.
With her father’s disappearance still a mystery, Kathryn is skeptical that the detective assigned to her case will be able to find her husband. Determined to uncover the truth, Kathryn is plunged into a world of politics, high-priced call girls and wealth. As she begins to search for her husband, a decades-old secret her mother took to the grave threatens to destroy all she holds dear. Caught up in a web of betrayals and deceit, and not knowing who to trust, Kathryn must find a way to survive as she discovers the past has a way of repeating itself.

Book contains only mild language and no graphic sex.

I’m doubly excited about my release because, honestly, I didn’t think I’d ever see this day! I started writing my book over seventeen years ago when I decided I needed a hobby after my husband retired. It all started with a “what if” question that ran round my mind for quite a long time: “What if my dad had been murdered when he disappeared instead of running off with another woman?” True story: for some reason my dad decided to leave with all of his belongings, with not a word or a note to my mom, on the very day I came home to visit after being gone for three months when I was eighteen. I decided it was a good starting place and my mystery needed to be written. I think part of it was a bit cathartic and so I based Kathryn’s father’s disappearance on my own father. When my first marriage fell apart, I wanted my then husband to just up and disappear (along with his new girlfriend) so… “material” for my story. A good lesson for the rest of the world… be careful or you might go in someone’s book, lol!But please be aware that all circumstances and characters in my book are pure fiction and I don’t wish anyone any ill will!

Why it took so long to write

After getting a few chapters completed I realized I really didn’t know how to write so I started taking writing courses and attending classes and conferences. Then I got distracted by writing nature articles for children’s magazines (I’ve had several published in a variety of magazines). When my two granddaughters made their entrance into the world I put everything aside to focus on them. Once they were in school I started writing again, took another writing course, and finally finished the book. After getting input from beta readers I had another rewrite or ten… got an agent with another couple rewrites, and received some good input from several publishers but no takers. I let the manuscript languish for several years and started my blog.

How I got to this point

Once I was happy with how my blog was running I dusted the manuscript off, did another rewrite and decided to self-publish. I know the conventional wisdom is that if your manuscript doesn’t sell, keep writing and honing your craft and maybe your next one will be successful. But my protagonist, Kathryn, was very insistent that she had a story to tell and didn’t want to be confined to a computer file for eternity. Plus after working with so many amazing authors on my blog, I had a chance to see how both the traditional publishing world and the self-publishing world worked. I received wonderful advice from several authors and took the plunge.

Despite it taking me forever to reach the point where I can say “I’m an author” I’m happy with the journey! I’ve had life experiences that make me feel like I could create a stronger plot. I’ve also grown in confidence to share Kathryn’s story that is, in part, a bit of my own life story. Along the way my suspense has morphed a bit to include a cozy mystery element to it, thanks to the influence of my blog. But it’s a truer reflection of who I am… bad things happen in life but there should always be the hope for a happy ending! 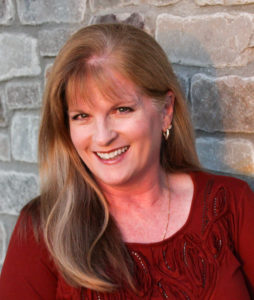 Kim Davis lives in Southern California with her husband, near wildfire country. During the Portola Hills fire in October 2007, she had to evacuate her two young granddaughters, one of whom has Rett Syndrome, as a wall of one hundred foot flames crept towards their home. Thankfully, due to the brave efforts of firefighters, their neighborhood was spared and no loss of life or property occurred. She was able to use that experience to write a harrowing scene in A Game of Deceit.

She writes the Cinnamon, Sugar, and a Little Bit of Murder blog and has had several children’s articles published in Cricket, Nature Friend, Skipping Stones, and the Seed of Truth magazines. Kim Davis is a member of Mystery Writers of America and Sisters in Crime.