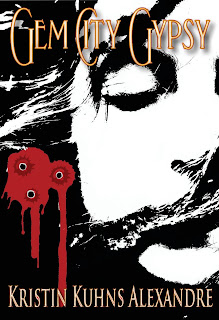 A Gypsy girl, two hot guys, a “little bit of magic,” and the leader of the Ku Klux Klan on her heels. What’s a Gypsy girl to do? If her name is Neci Stans, she will fight back. Colorful, vivid, and passionate, 19-year-old Neci Stans wants nothing more than to belong to Dayton, Ohio’s high society set and marry the man of her dreams, Ezra Crawford. But there’s some big problems: his racist father, the Ku Klux Klan, a woman who claims Ezra as her own, and a vindictive but sexy Englishman who wants Neci for his own. And of course, the biggest problem of all is her gypsy heritage and her “little bit” of magic. For 1900s Americans, life was changing, and Neci will make you cheer for the changes and cry for the heartbreaks.


Join us Friday August 30th from 3-6 EST for a fun and “mysterious” event. I have a ton of fun games planned and there are some really cool prizes for you all to win. Plus Kristin will be on hand to answer all of your questions!

Kristin Kuhns Alexandre is an author, publicist and Executive Film Producer.
This author has always wanted to share the story of her hometown and its unique history. As a child she met
the legendary Charles Kettering (trick or treating his home).
She is the author of “Gem City Gypsy” (Sisterhood Publications), her debut novel about a gypsy teenager in 1917. At the heart of the story is Neci Stans, a 19 year old from Dayton, Ohio who has survived the sinking of the Lusitania only to face down a band of German killers as they murder her mentor in Kinsale, Ireland.
Kristin was born and raised in Dayton, Ohio where she worked as a newspaper columnist for The Dayton Journal Herald.
After Sweet Briar College, Kristin worked as a newscaster for Channel 13 and Channel 5 News in NYC and for House Beautiful Magazine and the Economic Development Administration of Puerto Rico. She also worked as a Publicist for Ammirati, Puris Advertising and hosted a luncheon series for celebrities at The New York Yacht Club for many years.
Kristin was a co-founder and Speaker Co-ordinator of Earth Day 1970 and is the author of several books:
Gem City Gypsy
Nuncio and the Gypsy Girl
The Perfect Gentleman: the Secrets Rich Girls Use to Choose the Classiest Guys
Find a Great Guy: Now and Forever
https://www.facebook.com/GemCityGypsy
https://twitter.com/@gemcitygypsy
http://www.gemcitygypsy.com/contact.html
http://www.gemcitygypsy.com/