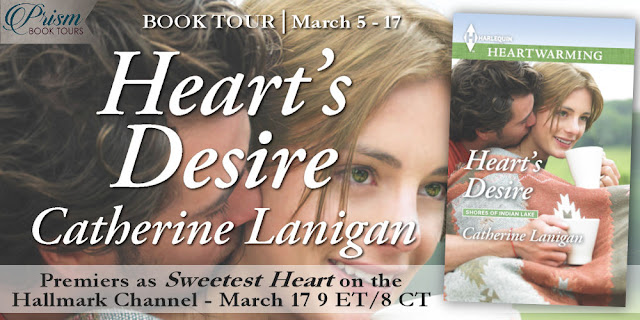 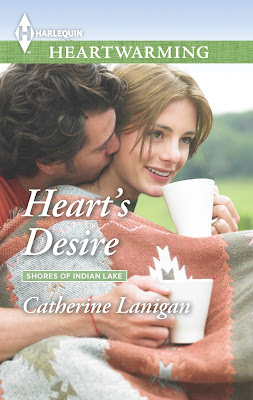 His homecoming is bittersweet…for both of them

Café owner Maddie Strong is finally ready to take her burgeoning cupcake business to the next level. With the help of handsome businessman Alex Perkins, her future’s all mapped out. Until her first love comes home.

At seventeen, Maddie adored Nate Barzonni with her whole heart and soul. But when he asked her to elope, she’d said no—she couldn’t let him throw away his dream of becoming a doctor. Then he vanished from her life for eleven years. Now the cardiac surgeon has returned to Indian Lake asking for a second chance, and Maddie has to choose between her new life…and the man she never stopped loving.

BEHIND THE SCENES ON A FILM SET

My husband used to say that making a film was no less work and no less hands than building a city. Though THE SWEETEST HEART is a television film on The Hallmark Channel, and certainly not TITANIC(which my agent worked on, by the way, for over two years), it’s mind-boggling what goes into the making of a film.

Sure there are folks out there who video some footage, put it together and post on YouTube. That’s not the kind of film I’m talking about.

One of the reasons this film looks so delicious, so lovely is the eye of the director, Steve Monroe. Yes, he was friendly and funny and had a great story about his kids jumping naked on the family trampoline at home in LA, while we were all freezing and wet in Vancouver. But, he was incredibly concentrated on the film. EVERY aspect of the film. I watched while he blocked the actors. As he created the lighting with his team. Along with the Director of Photography, there wasn’t an aspect overlooked.

Granted, I was only there during those days in the Cupcake Café, but I will tell you this. I watched while Steve cut the action because a flower was out of place. Doesn’t sound like much? To me, it told me everything about his eyes.

Thirty years ago, I met Sidney Pollack, the fabulous director of OUT OF AFRICA, SABRINA, HAVANA, and a million more. He was the “agent” for Dustin Hoffman in “Tootsie”. His last film before he died from cancer was “MAID OF HONOR”. He played the father to Patrick Dempsey.

Back to the past. I had written a book, “All or Nothing” set in Texas. A romantic suspense. I had written it with a film in mind. It was a labyrinth, but I got an appointment with the great Sidney Pollack. His office with lined with unusual photographs of doors. He collected them. Which I thought was fascinating. I wanted to ask him, “What are you looking for?” but this was a business meeting. I kept it simple. I pitched my book and handed him a 550 page manuscript. Back in the day, we did that. He said he’d read it. I didn’t believe him. Everyone knows Hollywood people don’t read. But he DID read my book. I still have the letter. I knew his agent, “Swifty”Irving Lazar at the time. The next day I had lunch in Swifty’s home as we watched the SuperBowl together. There was a particular play and I called the play before the referee did. Swifty was impressed. He said, “A girl who knows football.” I replied, “I grew up in a Notre Dame family of brothers and a father. It was survival.”

Obviously, Sidney didn’t take the project. He said he read the entire book and liked it, but it wasn’t what he wanted to do next. His next film? HAVANA with Robert Redford. I wouldn’t have done my project, either.

I have two favorite quotes from Sidney. For me, his words live on…

“I have been accused of playing [the romance] card too often, but I make no apologies because it engages people. How human beings connect, how they embrace and trust and love, engages people. And once you have that connection, the audience is paying attention and all the rest works.

I’m from Indiana. If I get it, everyone gets it.”

Not only am I from Indiana, but my Shores of Indian Lake are in Indiana. If I get it, everyone gets it.

Rest in peace, Sidney. We miss you.

Catherine Lanigan is the international bestselling and award-winning author of over forty-five published titles in both fiction and non-fiction, including the novelizations of Romancing the Stone and The Jewel of the Nile. Ms. Lanigan’s novels have been translated into over twenty-four languages. Lanigan was tasked by the NotMYkid foundation to pen a collection of compelling and informative true stories of teen addicts. Ms. Lanigan’s SHORES OF INDIAN LAKE series for HARLEQUIN HEARTWARMING includes LOVE SHADOWS, HEART’S DESIRE , A FINE YEAR FOR LOVE, KATIA’S PROMISE, FEAR OF FALLING, SOPHIE’S PATH, PROTECTING THE SINGLE MOM, FAMILY OF HIS OWN, HIS BABY DILEMMA, TOO CLOSE TO THE FIRE (2018) and MY RACING HEART (2019).

Ms. Lanigan is a frequent speaker at literary functions and book conventions as well as inspiring audiences with her real stories of angelic intervention from her Angel Tales series of books. She is an outspoken advocate for domestic violence and abuse and was honored by The National Domestic Violence Hotline in Washington, D.C. She has been a guest on numerous radio programs including “Coast to Coast” and on television interview and talk show programs as well as blogs, podcasts and online radio interview programs. She writes a monthly blog for Heartwarmingauthors.blogspot.com. Visit her at www.catherinelanigan.com, on Facebook, LinkedIn, Twitter@cathlanigan.com, Pinterest, Goodreads and Google+. 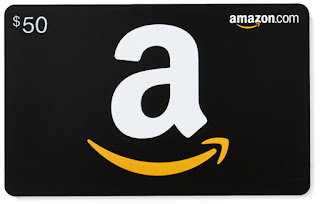