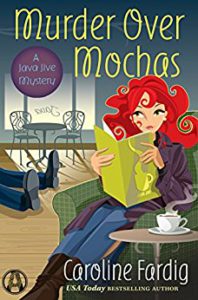 Murder Over Mochas by Caroline Fardig
A Java Jive Mystery #5

A blast from the past gets Nashville PI and coffeehouse manager Juliet Langley in hot water in this explosive mystery from the USA Today bestselling author of Death Before Decaf.

As a newly minted private eye, Juliet Langley has sworn to leave homicide to the authorities, limiting the scope of her investigations to cheating spouses and dirty business partners . . . like her ex-fiancé, Scott O’Malley. When Scott shows up unannounced at her coffeehouse, Java Jive, Juliet’s first instinct is to punch him in the nose. Her second is to turn down his desperate plea for help with a case that’s way too dangerous for her liking. But when Scott drops dead before her eyes, Juliet isn’t going to wait around for someone else to clear her name.

It’s only a matter of time before her tumultuous past with her ex-fiancé comes out, so Juliet teams up with her ex-boyfriend, police detective Ryder Hamilton, to figure out who poisoned Scott. They soon confirm that Scott was involved in an illegal scheme that’s definitely grounds for concern.

Just as romance is finally beginning to percolate for Juliet and her best friend, Pete Bennett, she has no choice but to head back to her hometown to seek out the truth. And she’ll need help from the locals to find the real killer—otherwise her happily ever after could easily end up including an actual ball and chain.

Caroline Fardig’s thrilling Java Jive mysteries can be read together or separately.

For an author, it’s always fun to daydream about how characters from two of your different series would interact if they were all in one book together. It’s like when your two favorite TV shows decide to do a crossover event. Best of both worlds, right? Although it was a blast to write a book crossover, I found it a little difficult to look at one set of my characters through a completely different lens.

In Murder Over Mochas, characters from my Lizzie Hart Mysteries series get to help the Java Jive gang solve the mystery of who killed Juliet’s unscrupulous ex-fiancé. Both series are written in first person point of view, with Juliet narrating the Java Jive series and Lizzie narrating her own series. It was kind of surreal to have my two heroines sharing scenes, but I could only be in Juliet’s head. I had to make Lizzie’s personality come across only through her words and her actions instead of through her ongoing commentary, which was a whole new way of thinking where that character was concerned. I had to form Juliet’s opinion of Lizzie, and that wasn’t easy. It was like trying to choose your favorite child.

The other Lizzie series characters weren’t so difficult to write through Juliet’s eyes. Although Blake is the love of Lizzie’s life and she sees him through rose-colored glasses, he tends to rub other people the wrong way. And Juliet is one of them, probably not to anyone’s surprise. One thing Juliet and Lizzie can agree on, though, is that their awkward friend Bethany is quite a diamond in the rough, which I’m sure other people would see if they could get past her quirky and often off-putting personality.

It was great fun getting to mingle my beloved characters in my heroines’ fictional hometown of Liberty and let them work together to bring a killer to justice. Now that I’ve done a mash-up like this, I’ll be all the more appreciative of any TV show crossovers I might see! 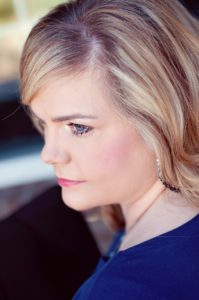