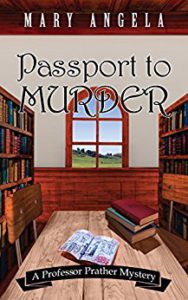 Passport to Murder by Mary Angela
A Professor Prather Mystery #2

Start with an unlucky number. Throw in a romantic location. Include a dashing Frenchman and an uncompromising professor. And you have all the ingredients for a passport to murder.

This semester, it seems that Professor Prather’s dreams are about to come true. Ever since she was a young girl, she’s imagined going to France, and her French colleague, André Duman, has finally made that trip possible. Over spring break, she and André are to lead a group of students and faculty to Paris to explore the City of Light. But before she can utter her first bonjour, a professor dies, and they are stuck in Minneapolis. She returns to Copper Bluff with an unstamped passport and a mystery to solve.

When André becomes the prime suspect, Emmeline puts her research skills to good use, determined to find out who really killed the professor and spoiled their spring break plans. With thirteen travelers assembled, the possibilities are varied and villainous. Luckily, her dear friend and sidekick, Lenny Jenkins, is close by. Together, they will sort through the conflicting clues even if it costs them time, trouble, or tenure.

As he poured from the tap, I said, “I know one of the guys in the opening band. Can you tell me how I can get backstage?”

He placed my beer on the counter, his massive arm a sleeve of tattoos. I especially admired the hourglass covered in thorns. Had we been in a quieter venue, I might have remarked on its metaphorical meaning.

“You know one of the guys, huh?” A large grin spread his thick goatee and revealed a beautiful set of straight, white teeth.

He didn’t believe me. I handed him my cash. “Yes, Lenny Jenkins, the guitar player. He’s a good friend of mine.”

He took the money and punched some keys on the register. “Look, sweetheart, if you want to see your friend, I suggest you call him.” He slapped my change on the counter.

“That would be a good idea except for the high-decibel noise level.” I took a drink of my beer, which was on the warm side of lukewarm. “If you would point me in the direction of the dressing rooms, I could wait outside.”

He shook his head and pointed to a plain door at the left. “Dressing rooms?” He laughed. “They come out over there.”

I left my change on the counter. “Thank you.”

I walked toward the door, but I knew by the size of the two gentlemen standing outside, I would not be allowed to enter. Their shirts didn’t say Security, but their crossed arms certainly did. Although the general scene was one of complete chaos, the two men stood apart from their surroundings, calm and serene. I had a feeling they sensed my presence the moment I entered their space, though neither looked directly at me.

Before I could devise a nefarious plan to get past the men, Lenny burst through the door covered in sweat and bristling with excitement.

He stopped, looking left and right; then his face lit up at the sight of me.

We came together in a matter of seconds. Caught up in the rock-and-roll atmosphere, I threw my arms around his shoulders, and he returned my affection with a squeeze of my waist.

His hands still resting on my hips, he regarded me from head to toe. “What are you doing here? I thought you’d be halfway to Paris by now.”

“It’s a long story,” I said with a smile. “First, let me say you were great out there. Electrifying.”

“You saw me?” he said, leading me to a quieter corner. “When did you get here?”

“About fifteen minutes ago,” I said.

He looked off in the direction of the crowd, and I knew he was thinking back to his performance.

“You want to go listen to the band?”

He refocused on me. “Nah. I’d rather hear what the hell happened to Paris. You want to get out of here?” 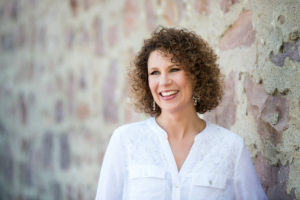 Like her protagonist in the Professor Prather mystery series, Mary Angela lives on the Great Plains and teaches college writing and literature. When she’s not grading papers (when is she not grading papers?), she enjoys reading, traveling, and spending time with her family. She and her husband have two amazing daughters, one adorable dog, and a cat who would rather not be limited by an adjective. For more information, go to www.maryangelabooks.com.

10 Responses to “Passport to Murder by Mary Angela – Excerpt + Giveaway”