Check out my stop on The Veiled Threat blog tour! 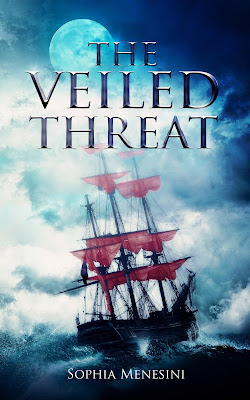 Captain Shea Lara is the current leader of The Veiled Duchess. The most feared pirate ship in all of Neried. And now, after completing her former mentor’s final score, she’s retiring. Everything seems to be coming to an end… Until a mysterious stranger drags her back into the fold with an offer for a score she can’t refuse. All she has to do is kidnap the crowned princess of the northern Queendom, Princess Joana of Arethusa. The prize is just within reach. But sparks fly as the two women collide. And an obscured threat that could upturn Shea’s entire world storms on the horizon. She’ll face it alone unless she can allow herself the support she needs from old and new allies alike. Something’s coming and Shea is at the center of it.

Excerpt:
“I was claimed by Triton, the son of Queen Mother Amphitrite and All-Father Poseidon. It was a huge honor to my family,” Thetis tells her recalling the events from long ago.
“What was it like?”
“What?”
“In the Underdeep?” Shea asks staring into the black paint on the canvas, the deeper she looks the more she feels like she can see eyes staring back.
“Dark, suffocating at first and a cold that seeps deep into your bones. But then you see it and it’s like nothing I can describe. It’s magic Shea, and it’s very real. It goes beyond the meager elemental magic. As you know the four users, Aquarians for water, Gemins for air, Tauries for earth, and Sagittarians for fire. Child’s play in comparison to claimed magic. In the Underdeep it’s the same you can feel the immortal magic, ancient power.”
Shivers crawl down Shea’s spine and she wraps her arms around herself staring at the painting.

About the Author
The Storyteller with Salt Water in Her Veins
Sophia Menesini lives in Martinez, CA with her husband, and their two small Chihuahuas, Ziggy and Zeppelin. The Veiled Threat is her first novel. Sophia is an avid tea connoisseur and lover of Scotland with an unconventional memory for obscure Disney and Broadway song lyrics.
Author Links:
Website: https://www.sophiamenesini.com/
Twitter: https://twitter.com/MenesiniSophia
Tumblr: https://theveiledduchessseries.tumblr.com/
Facebook: https://www.facebook.com/theveiledthreatnovel/
Instagram: https://www.instagram.com/theveiledthreatnovel/?hl=en