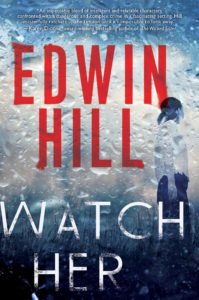 While attending a gala at Prescott University’s lavish new campus, Hester and White, are called to the home of the college’s owners, Tucker and Jennifer Matson. Jennifer claims someone broke into Pinebank, their secluded mansion on the banks of Jamaica Pond. The more Hester and Angela investigate, the less they believe Jennifer’s story, leaving Hester to wonder why she would lie.

When Hester is asked by the college’s general manager to locate some missing alumni, she employs her research skills on the family and their for-profit university. Between financial transgressions, a long-ago tragedy and rumors of infidelity, it’s clear the Matsons aren’t immune to scandal or mishap. But when one of the missing students turns up dead, the mystery takes on new urgency. Hester is edging closer to the truth, but as a decades-old secret collides with new lies, a killer grows more determined to keep the past buried with the dead…

Kensington | Amazon
Excerpt from WATCH HER by Edwin Hill

“I haven’t been to this neighborhood in a few years,” Hester said.

“I went to high school a few blocks from here,” Morgan said.

Hester tensed at this tidbit of information. For most of their nine-year relationship, Hester and Morgan had had an unspoken rule: they didn’t talk about their pasts, including dating history or family. It was like they’d both appeared on Earth fully formed on the day they’d met. Lately, though, Morgan had begun to dangle factoids like this one, tiny windows into his past. She could have asked follow-up questions—What school? Were you in the marching band? Did you date the head cheerleader?— but she let the statement hang between them.

Kate, however, did not.

“Can we see your school?” she asked.

“I don’t think it’s there anymore,” Morgan said. “They tore it down.”

Kate considered the answer for a moment. “Before I was born,” she said, her latest obsession being the time before her own existence.

Hester yanked open the glass doors to the gallery and led the way into an atrium that spanned the length of two buildings. The noise from the crowd thankfully drowned out any more of Kate’s questions.

“I didn’t know this would be such a big deal,” Hester shouted.

Banners fell from the soaring ceilings announcing BOSTON’S THIRTY UNDER 30 IN GRAPHIC DESIGN while servers in black ties circulated among the crowd of women in cocktail dresses and men in expensive glasses. Hester recognized familiar faces from TV, local newscasters and politicians, even a state senator. She pointed to a photo on one of the banners. “There’s Jamie,” she said, grinning at the image of their friend’s beaming face.

Kate took a step toward the banner, into the throngs surrounding them. Hester grabbed her hand. “Stick with me,” she said.

“I know, but stay where I can see you anyway.”

Morgan checked their coats and offered an arm. “Should we dive in?”

Hester smoothed the fabric on her black cocktail dress and put a hand to her hair, which she’d tied into a bun. She’d even dug out contact lenses and makeup for this event. She occasionally attended cocktail parties at Harvard, where she worked as a research librarian, but most nights she spent at home with Morgan and Kate and their basset hound, Waffles, or, occasionally, out with a tight-knit group of friends, one of whom, Angela White, Sergeant Detective Angela White, walked toward her now.

“I’m like a fly in milk at this shindig,” Angela said.

Usually, Angela wore tailored suits and practical shoes that made it easy to move on the job, but tonight she’d opted for a multicolored caftan and had wound a scarf around her thick, natural hair and tied it in an elaborate knot. She even wore heels. “I went for artistic,” she said, when she caught Hester eyeing her getup. “Don’t get used to it. These shoes are killing me.”

Hester brushed a few dog hairs from Angela’s dress. “George travels with you, even when you leave him home.”

“Damn dog,” Angela said, shooting Morgan a glare. “I still blame you for foisting that creature on us, Dr. Maguire.”

Angela’s wife, Cary, appeared and handed her a plastic cup of white wine. “She loves George,” Cary said, in her soft, therapeutic voice. “Even when he slobbers.”
“He’s a pain in my ass.”

Isaiah, Cary’s seven-year-old son, tugged at Hester’s sleeve. Unlike Kate, Isaiah was shy and avoided speaking unless Hester crouched to let him whisper in her ear. “I won the hundred-meter butterfly,” he said.

“Like Michael Phelps,” Hester said. “Show me the ribbon next time I’m over.”

Just as Angela hated most dogs, Hester, as a rule, wasn’t a fan of most kids other than Kate. She made a few rare exceptions, and Isaiah was one of them.

Morgan sidled up to her. “Don’t you want to know more about my high school?” he whispered.

A server swung by with a tray of well-timed hors d’oeuvres. “Lobster and corn empanada?”

Hester shoved one into her mouth to keep from answering, but Morgan waited patiently for her to finish chewing.

“You could tell me something too,” he said. “It could be a game. One question a day. Ask me anything. We both have to answer, no matter what.”

“Come on. Tell me something little. Did you play the clarinet?”

“You look like Waffles waiting for a treat,” Hester said, and when he still wouldn’t let it go, she added, “Tomorrow, at work, I’ll find any answer I want. Maybe I’ll figure out what Jamaica Plain schools were demolished. I’ll find your yearbook, and I’ll do it all in secret. Happy?”

Morgan grinned and ate the empanada. “You wouldn’t do that,” he said. “We trust each other too much.”

She wouldn’t. But it was nice to know she could.

“That, I should have guessed,” Morgan said.

“Where did the kids go?” Angela asked.

Hester turned in the crowded room, but Kate had managed to slip away. So had Isaiah, though Hester would bet money that Kate had led the escape. “I’ll find her. Get me a whisky. Neat.”

Morgan saluted and headed toward the bar.

“Text if you find them.”

Hester shoved her way into the crowd. She also shoved down the fear that still gripped at her heart whenever Kate was out of sight. They couldn’t have gone far.

Not in thirty seconds. 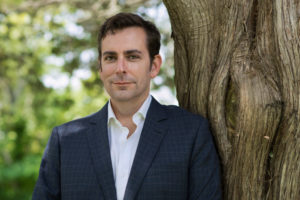 EDWIN HILL is the author of the critically acclaimed Hester Thursby mystery series, the first of which, “Little Comfort,” was an Agatha Award finalist, a selection of the Mysterious Press First Mystery Club, and a Publishers Marketplace Buzz Books selection. The second installment, “The Missing Ones,” was also an Agatha Award finalist and a Sue Grafton Memorial Award nominee. Formerly the vice president and editorial director for Bedford/St. Martin’s (Macmillan), he now teaches at Emerson College and has written for the L.A. Review of Books, The Life Sentence, Publishers Weekly, and Ellery Queen Mystery Magazine. He lives in Roslindale, Massachusetts with his partner Michael and their Labrador, Edith Ann. Visit Edwin online at www.Edwin-Hill.com. 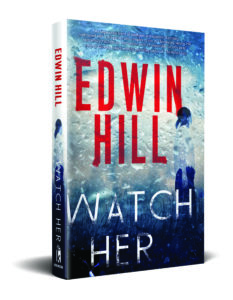