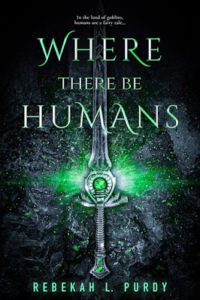 Where There Be Humans by Rebekah L. Purdy

Sixteen-year-old Ivy Archer is arguably the best warrior-in-training Gob Hollow has ever seen. Yet everyone—except her best friend she suddenly has other feelings for—looks down on her because she’s only half goblin, with no idea what the other half is. She’s always suspected it might be human. But humans, she’s been told, aren’t real. They’re only creatures of myth. When the prince of their kingdom is taken for ransom, it’s Ivy’s big chance to prove her worth. And when she learns his captors are human, the rescue mission becomes personal. The stories were clearly wrong, and now she has a chance to find the truth about her lineage, as well. If she survives… With a small band of warriors at her command, including her best friend turned crush that’s getting harder to hide, Ivy sets out to find the prince and her human family. But the answers lie within secrets and conspiracies that run far deeper than she ever imagined.

Goodreads | Amazon | Publisher & Other Buy Links
EXCERPT 1:
As we headed toward the large structure, Dorian leaned forward. “I heard the Council is coming in to speak to us during class today.”

“And on whose authority do you have that?” I teased.

“I’ve got connections in the palace.” He grinned.

“So what does the Council want?”

He leaned in closer, whispering, “There has been mention of a Mission.”

Blessed Hag! The Council hadn’t called for a Mission since before I was born. There were rumors that something happened in the human world the year King Starshooter and his advisors went, which was about seventeen or eighteen years ago, something bad enough they’d quit sending Goblins. King Starshooter’s father deemed them too dangerous. It was around that time, too, that he declared humans as fairytales and set laws against speaking of them or trying to search them out. Penalty being prison or possible death, depending on how far one went with their stories and ventures. Although, I knew there were people who worked in the Gob Hollow black market and still supplied information—for a price.

I chewed my bottom lip. If I were part of the Mission it could change everything. The Mission used to be a coming-of-age journey that consisted of royals, nobles, and a few select warriors trying to prove they were ready for leadership. The king would grant them a special task to test their abilities outside of Gob Hollow.

“Do you know who they’re going to choose?” I asked.

Dorian’s hand tightened on my waist, pulling me back toward him. “I’m not sure yet. Father is being secretive. But I’ve put in a good word for you.”

I peered over my shoulder and smiled.

“Prince Dorian and Lady Ivy, heads to the front and mouths shut,” Kimblay barked. “One more word from the two of you will result in an evening in the gutters.”

Eyes facing forward again, I sighed. Titles didn’t mean a thing to the headmistress, and I couldn’t be put on gutter duty tonight. I had plans and things to figure out.

First, how to get into the Archives.

And second, how to make sure I got on the list for the Mission. 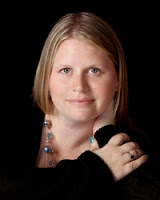 I was born and raised in Michigan (just look for the mitten-shaped state on the map). I’ve lived here most of my life other than the few years I spent in the U.S. Army. At which time I got a chance to experience MO, KS, SC, and CA.

I work full time for the court system and in my free time I write YA stories. Pretty much any genre within the YA realm is game for me, but my favorites are fantasy, urban fantasy, paranormal romance, thrillers, light sci-fi, and some time travel.

I also have a big family–I like to consider us the modern day Brady Bunch. When my hubby and I met and got married, he had 3 children from a previous marriage, I had 2 and we have 1 together. It’s a lot of fun though.

And I can’t forget my other family members–yep, we’ve got some pets: 4 dogs, 3 cats, and 1 turtle. Everyone in the family has one…I won’t bore you all with their names (unless you really want to know). Okay, you talked me into it! Jack, Pearl, Grr…(yes that’s my dog’s name), Leia, Callie, Mooshoo, Grouchy, and Sorbert. Other than writing some of my other hobbies include: reading (mostly YA of course), singing, swimming, football, soccer, running, camping, sledding, church, hanging with my kids, and traveling.

I belong to a fabulous writing group called YA Fiction Fantatics (YAFF) and you guessed it we all write YA!

Tour Brought To You By: